WORLDwrite was founded 26 years ago. Its Charity Commission registration number is 1060869 and it has a volunteer centre, offices and studio in Hackney, London E5. Historically, the charity ran global youth exchange programmes and educational projects often reporting back ‘on film’. While maintaining global partners, its global reach and internationalist principles, the charity gradually evolved to become the film-focussed educational entity it is now. Today, the charity endeavours to realise its charitable objectives by providing free film and media training and by supporting young people to produce alternative programmes for broadcast on WORLDbytes, the charity’s online Citizen TV channel. Last year the charity won the 2018 Children and Young People Now Arts and Culture Award for its Citizen TV and film-making work with young people.

In one sense we’re all citizen journalists now and the mainstream media gathers sound bites from us to extend its reach and provide an interactive edge. We’re allowed to text vote on shows, our tweets are read out on the news, an occasional mobile phone clip gets aired but where is the access to the training or expensive kit to allow us to contribute serious reports, alternative stories, to discuss our views and news? WORLDbytes, the charity’s pioneering channel, has stepped into the breach to ensure Citizen TV is both possible and taken seriously. Dedicated to advancing new knowledge, skills and ideas, the charity promotes excellence in citizen reporting and provides free training to young volunteer-learners which combines practical film-making with tackling challenging issues.

We work with volunteer-learners to craft well shot programmes with something new to say. WORLDbytes’ film facilities and free training provides access to gear and tuition that individuals would never be able to afford otherwise. Uniquely, WORLDbytes has an open door policy, working with people from across the world and around the corner. We encourage a global outlook, critical understanding and aspirations for the best for all. Our programmes push boundaries, question the way the world is and make an impact.

At WORLDbytes we aim high – while privileging content over style, our pool of professional tutors promote top end production values and broadcast quality standards to do justice to the ideas of our aspirant crews. Working with people who have often never picked up a camera before, we promote serious research and discussion and provide intensive practical training on shoots for actual programmes. We equip our learners to:

Volunteer-learners are taught in the studio and out on the streets, negotiating their way in public spaces to seriously engage with fellow citizens on key issues. Contributing far more than the usual sound bites, volunteer-learners plan programmes, interview experts, academics and policy makers, create scripts for lighter hearted items, form crews and learn to disseminate and distribute their programmes worldwide.

We believe Citizen TV has a vital role to play in covering the ideas and stories rarely told, without the constraints of commissioners’ whims, mainstream “ratings” wars and fears of upsetting conventional wisdom. There is a different tale to be told and WORLDbytes’ motto is “Don’t shout at the telly, change the message on it”.

Our story: a brief history

WORLDwrite was officially born in 1994, inspired by young participants who had taken part in European antiracist & anti-militarist tours from the UN to Buchenwald. Questioning sacred cows along the way – from overpopulation to immigration controls – they learned much from extraordinary figures, such as the ‘Eidleweiss Piraten’: the youngsters who stood up against the Hitler Youth in Germany.

The name WORLDwrite was taken from a ‘No More Hiroshimas’ pen pal campaign, to mark the 50th anniversary of the atomic bombing of Hiroshima and Nagasaki, but refashioned to fit more ambitious plans. In 1995 a group of young people embarked on an exchange with Hiroshima to investigate, and then challenge, the racial thinking which had justified the extermination of over 200,000 people. In the following years, ground-breaking two-way youth exchanges with Europe, Ghana, Brazil, India, Uganda and more put WORLDwrite’s ‘people first’ approach on the map, and informed the charity’s slogan, ‘Ferraris For All.’

Each WORLDwrite venture raised debate in hundreds of schools, and inspired the charity to evolve from practical exchange programmes to film-based reports and projects. To date fourteen unique documentaries have made their mark on modern misanthropy, from Where Do People Fit In? filmed across the Amazon; to the 2005 Pricking the Missionary Position series, which included A Letter to Geldof and I’m a Subsistence Farmer, Get Me Out of Here, culminating with Flush it!, expressing aspirations for the best toilets globally.

Never settling for the supposed wisdom of the day, the charity’s pioneering young volunteers made many breakthroughs. In 1997, the charity took the first computers to rural villages in Ghana themselves when the National Lottery Fund refused to support a shipment, as computers were not considered ‘basic needs’. WORLDwrite fought the Home Office to bring what it had declared ‘inappropriate people’ into Britain from Ghana, and won. The charity invaded the UNDP to challenge its new-found concern for ‘reproductive health’ (i.e. population control with a facelift), causing much-needed uproar. It also launched Time to Ditch the Sustainababble, and its own WSSD summit for serious development in 2002 – a time when the limiting policies of sustainability were less well known.

In 2008 the charity’s pioneering Citizen TV project WORLDbytes – a school of thought and a practical school – was born. With over 3000 trained in camera work and over 1000 programmes later, it is constantly looking behind the headlines, and flourishes today.

In 2011 our first historical documentary, Sylvia Pankhurst: Everything is Possible won accolades for accurately reflecting this lesser-known heroine’s political vision, and is still being screened.

Completed in 2016, the works of Trinidad-born revolutionary C.L.R. James informed an even greater documentary adventure, aiming to inspire a love of reading, history-making and humanity. The awarding winning film, which is still screening globally, features the man himself and we hope this collective effort, made with over 200 volunteers, will stand the test of time.

In 2017, to mark the centenary of the October 1917 revolution, volunteers made 1917: Why the Russian Revolution Matters and cut through many of the myths surrounding this world changing event which is largely lost sight of today. The film remains a valuable, educative tool of story too rarely told.

In 2018 the charity launched its latest award winning documentary Women: a success story which is now stirring debate, screening at many festivals and picking up awards.

2019 marked WORLDwrite’s 25th anniversary, the charity’s extraordinary history is something the many who have contributed should rightly be proud of.

Over the years, thousands of young people and volunteers have made a project which many thought impossible – too ‘out there’, too critical and un-fundable – and have creatively challenged views and opened minds along the way. WORLDwrite’s 21st birthday was celebrated in style. For it’s 25th anniversary the charity launched this new website and an appeal to keep it going into the future.

Now in 2020 we’ve been hard hit by the Covid-19 lockdown. We hope you will make a donation to help us re-open and keep going.

For WORLDwrite’s history in photographs check out our Gallery. It’s a work in progress but captures many great moments.

From Hiroshima to Hackney

Twenty five years ago, a group of school students working with WORLDwrite began a year-long grand tour of UK schools and cities, to tell the truth 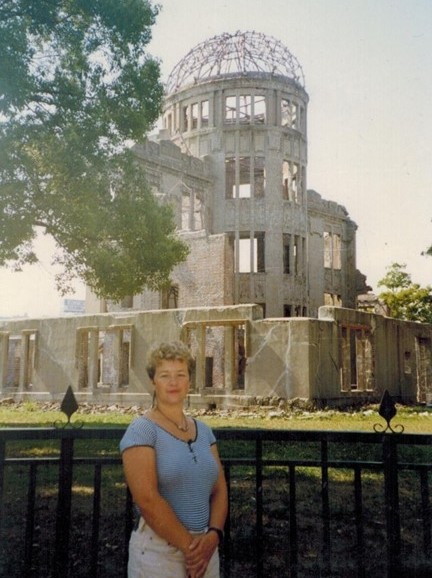 about Hiroshima, which culminated in an exchange visit to the beautiful but rarely visited city itself on the fiftieth anniversary of its destruction, in 1995. Nuking Hiroshima, they explained to thousands of their UK peers, was accepted at the time because of a race war. The Japanese were rats, locusts and beasts, as President Truman put it at the time. They were not like us and, therefore, their obliteration was a fair price for the end of the war.

The school students’ mission was not to elevate nuclear weapons as uniquely destructive, dictate who can have them or demand apologies. No, it was to challenge the racial thinking that legitimised the White Man’s Bomb. They set out to tell the truth about the war – that the Japanese were viewed as vermin to be eradicated and that Japan was on its knees when this great experiment in human annihilation was conducted.

For the students, it was an eye-opening expedition. The human ‘shadows’ of those vaporised could be seen etched on Hiroshima’s pavements; the lonely A-Bomb Dome, the only building left standing after the atomic onslaught, was strangely beautiful (ironically, it’s now a world-heritage site); and the Children’s Peace Monument in the Peace Memorial Park was festooned with chains of paper cranes. These were started by Sadako Sasaki, a little girl who, suffering from radiation-induced leukaemia, believed that if she folded 1,000 she’d be cured. She died in 1955. Today, an average of 10 million cranes are sent to the park from across the globe each year. 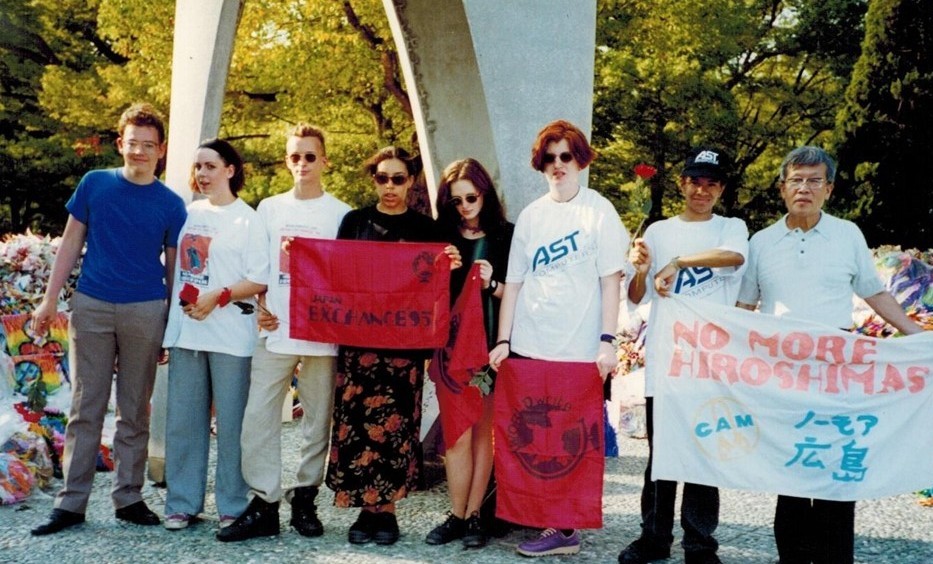 s) also told us their stories. It could sometimes be a disconcerting experience. Their faces wore fixed smiles, a result of endless plastic surgery. And we learned the lesser-known stories of Hiroshima, too, such as Britain’s use of military prisoners in the aftermath of the bomb to test the effects of radiation.

Hiroshima today is impressive. Rebuilt from the dust, it has been turned into a wonder of modernity. Its setting, nestled amid the mountains, means that it becomes a ski resort in winter. It also meant that in August 1945, residents couldn’t see the approach of Enola Gay and its atomic payload.

We were treated like royalty while we were there – it was almost too much. We were chaperoned, wined, dined, introduced to dignitaries and invited to address large audiences. And, embarrassingly, the apologies kept coming: for the war; for Pearl Harbour; for the prisoner of- war camps; for Burma… But we weren’t there to apologise for what we had no part in. And we didn’t expect or want apologies from our Japanese peers either. This was a truth trip. It was for young people to understand history, to make new friends internationally, to be future-orientated and always equipped to move on. And from this, the charity WORLDwrite, of which I’m director, was born.

Of course, much has changed over the decades. Even thinking how best to celebrate WORLD-write’s 25 years of extraordinary projects and pioneering truth trips across the globe, involving hundreds of young people, is difficult. In 1994, we were challenging racial thinking and ideas of Western superiority. Today, the West is in the dog house, and official ‘anti-racism’ is everywhere. Even highlighting the horrors of Hiroshima is commonplace today (although the lies about Hiroshima keep being peddled, especially the idea that ‘it ended the war’).

As an education charity, WORLDwrite set out to understand and champion new knowledge. We wanted to say what may not be popular but needed saying. So, today, we move on. There’s nothing to be learned from repeating what people already know and think. We will always strive to challenge new orthodoxies, not echo them. So, what next for a human-centred charity that believes in young people’s capacity to understand and change the world? We have to continue telling it like it is, of course. That is what we’ve done for 25 years, and with your support, that’s what we will continue to do well into the future.